Source: POEMS Mercury platform
Past performance is not a reliable indicator of future performance

Amazon (NASDAQ: AMZN) technical suggest that the stock may enter into a bullish rebound soon.

The large addressable global market with low penetration rate. According to the World Travel and Tourism Committee’s research, 2018’s total global tourism consumption reached USD 5,465bn; of which bookings of the top three OTAs accounted for only 5% of worldwide travel spend.

Ctrip acquired Skyscanner on November 2016. Based on data from google trends since Ctrip’s acquisition of Skyscanner, Skyscanner retained its position as the top two most popular travel brand search platforms in the world, giving Ctrip valuable access to the global online travel agent market. In 2Q19, revenue from international business accounted for more than 35% of total revenue, and Ctrip estimates the international business to grow even faster 40-50% YoY in next few years because of the ever-growing MAU of Skyscanner and Trip.com.

Ctrip the most popular online travel agent in China. According to Ministry of Culture and Tourism of the People’s Republic of China, 2018’s total China tourism consumption reached USD 1,000bn. OTA accounted for 16% of China’s total travel spend, of which Ctrip accounted for around 63% of the online market share.

Hong Kong and Taiwan disruptions. The majority of the top-line impact comes from Hong Kong’s disruption and China’s cessation of individual travel permits issuance to Taiwan for citizens in 47 mainland cities from August 2019.

We are positive on Ctrip due to the large addressable global online travel agent market, its leading position in China and unique core competencies. Ctrip currently trades at P/E of 36.8 and P/B of 1.2.

Source: stocksbnb.com
Past performance is not a reliable indicator of future performance

Ctrip.com (US: CTRP) current price action suggests that the stock may enter into a bullish breakout based on the technicals indicated below: 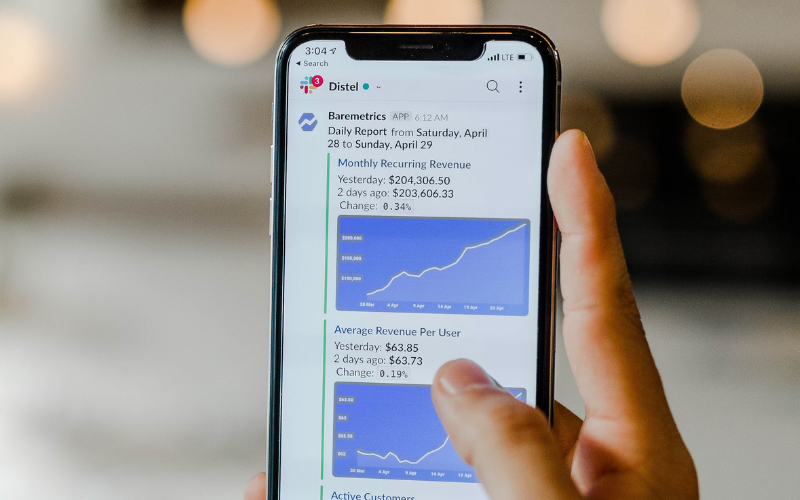 Slack Technologies Inc., which offers a workplace collaboration platform, is going public tomorrow. Instead of an IPO, it is going public through a Direct Public Offering (DPO) following the footsteps of Spotify and others.

Here is some information about Slack.

How to Buy or Sell Slack Stocks in Australia? 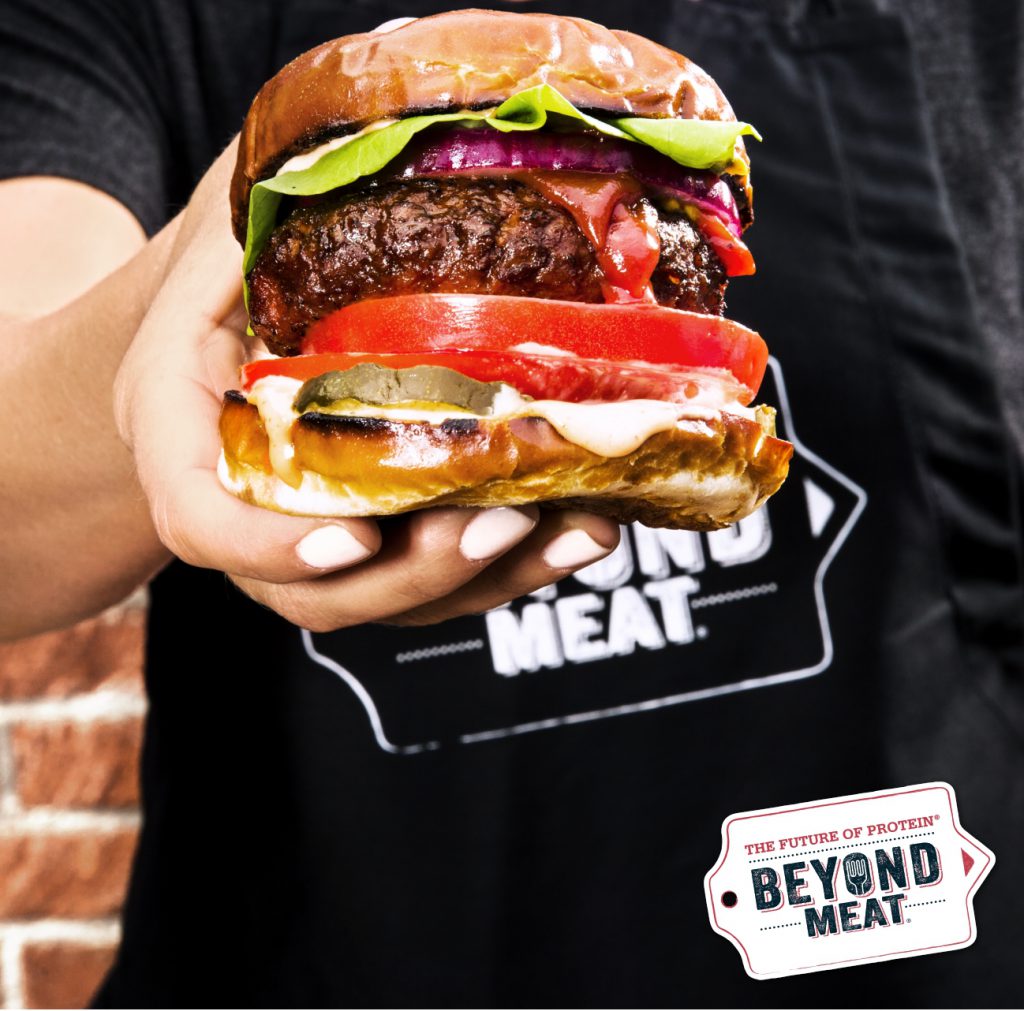 It looks and tastes like meat, but it’s not. Beyond Meat, the latest stock market sensation in America, is a plant based meat company that is not only targeting vegans but also looking to take on the US$1.4 Trillion meat industry.

With a listing price of US$25 in early May, the shares recently hit a high US$96.78 and have certainly created some headlines as investors digest this new kid on the block… 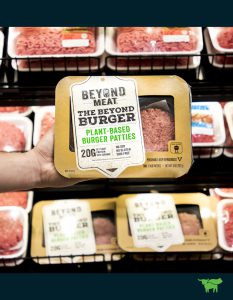 What Does Beyond Meat Do?

What Is Their Approach? 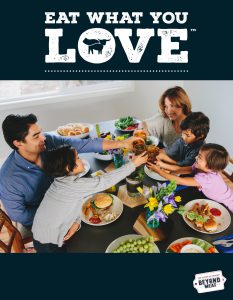 Who Are Their Customers? 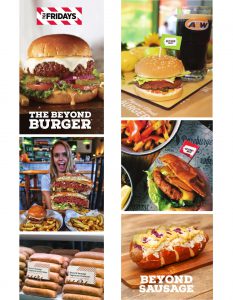 •    Tim Hortons, the Canadian coffee chain, is testing Beyond Meat’s plant-based sausages on its menu.

•    More than half of Canadians eat meat alternatives, according to Mintel.

•    Another International restaurant brand, Burger King, is rolling out its plant-based “Impossible Whopper” in more markets. 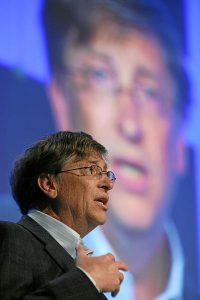 How to Buy or Sell Beyond Meat Stocks in Australia?

Ride hailing giant Uber, one of the successful startups in the sharing economy business, has officially kicked off its blockbuster IPO. The company is expected to list on the New York Stock Exchange (NYSE) early May 2019 under the ticker symbol ‘UBER’. The IPO price is yet to be confirmed, but Uber is looking to raise around $10 billion, placing the valuation of the company to as much as $100 billion according to an anonymous source.1 This will make Uber’s IPO one of the largest technology IPO of all time and the largest since Alibaba debuted in 2014.

Uber is the largest cab service provider that does not own any vehicle, just like Airbnb – the largest provider of accommodation without owning any property – and Alibaba – the world’s largest retailer without carrying inventory. All these companies connect the providers or sellers to end users or buyers via their own technology platform, acting as a platform provider and removing the need of owning any asset.

Passengers and drivers are connected via Uber’s app. Passengers can enter their destination and an approximate fare will be shown on the app, with the drivers who registered with Uber being notified via the app once passengers confirm the booking. Drivers who use Uber need not be an existing taxi driver and can register with their own car or even rent a car to drive with Uber.

Started in 2009, Uber has expanded its operation to over 700 cities and estimated to have around 100 million active users worldwide as seen in Figure 1. The company also expanded its services into food delivery (Uber Eats), bicycle sharing (JUMP Bikes) and shipping (Uber Freight). Uber crossed a significant milestone in 2018, taking only 12 months to double from 5 billion completed trips in Sep 2017 to over 10 billion completed trips in Sep 2018 as seen in Figure 2.

How does Uber earn money?

Uber, the owner of the network service, makes money by taking a cut of the ride fare, largely similar to a taxi company. The network uses an optimisation algorithm on ride matching and a dynamic pricing to balance supply and demand, which is the reason behind surge pricing. These allows for more efficient utilisation of its registered drivers and helps drive more revenue.

Gross bookings grew 79% from 2016 and 45% from 2017 while Revenue grew 107% from 2016 and 42% from 2017 as seen in Table 1. The $1 billion positive net income in 2018 was largely derived from the sale of its business in Russia, China and South East Asia. This one-off income is not expected to recur in future, thus using adjusted EBITDA is a better way to evaluate Uber’s operating performance. We do see narrowing losses but we do not foresee Uber turning a profit in the near future. 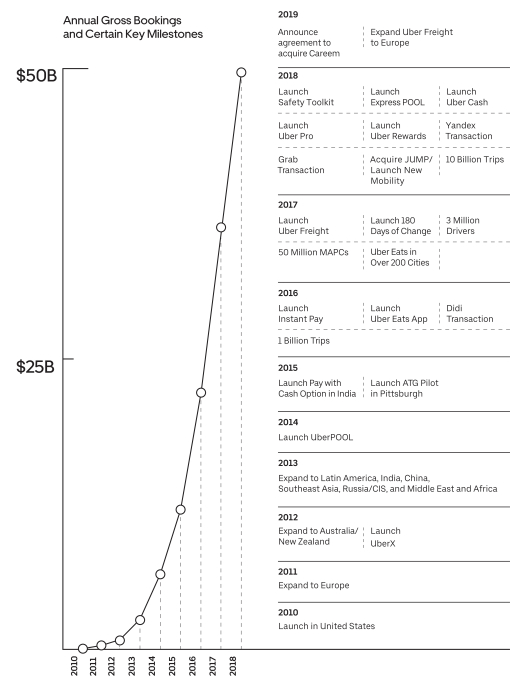 Challenges across the globe

Ever since its launch in 2010, Uber faced a lot of challenges as its model impacts the existing taxi service industry and introduces new regulatory challenges to the local authorities around the world. Anti-Uber protests and strikes have already taken place in many major cities like London, Paris, Sao Paulo, Melbourne, Rome and Toronto, with the latest one happening in Madrid earlier this year. Many authorities have been debating whether to legalise this business model and how to regulate the new service while pacifying taxi drivers at the same time. Uber is also banned in certain countries like Denmark, Hungary and Bulgaria, as well as partially banned in most of the remaining European countries. One of the main arguments is whether drivers should be treated as employees instead of contractors.

Ease of technology transfer and replication nowadays also places Uber in a very challenging situation. Despite its rapid expansion in a short span of time, Uber faced stiff competition across the globe from local companies like Didi Chuxing in China, Grab in South East Asia, and Lyft in the United State, Uber’s country of origin and also where it is based at. The battle of cash burning in multiple regions with different competitors also leaves Uber at risk.

After running multiple marketing campaigns and fierce competition with a local competitor in China, Uber decided to merge with Didi Chuxing in August 2016. Uber took an 18.8% stake in Didi after the transaction. In July 2017, Uber reached an agreement with Yandex in Russia to combine their business and form a new company. Uber have 3 out of 7 seats on the board and a 38% stake in the new company. In March 2018, Uber combine its business in South East Asia with the regional player Grab in exchange for a 30% stake in it. All the staff, users and drivers were transferred over to Grab. [Source: Uber IPO prospectus]

Uber took a different approach in the Middle East market. On 25th March 2019, Uber announced its acquisition of Careem, their competitor in the Middle East, for $3.1 billion. Interestingly, Uber will be operating Careem independently under Careem’s existing leadership after the acquisition. As the acquisition is still subject to regulatory approval in some countries, both brands will still continue to operate separately in the region until further integration. [Source: Uber IPO prospectus]

On the surface, Uber appears to have quit from the abovementioned markets, but in fact, it still plays a vital role in the local companies with their significant stake and representatives on the board.

Live beyond – Future of Transportation

Despite all the challenges and difficulties, Uber continues to seek for opportunities to expand its business in ridesharing, food delivery as well as other advanced technology programs.

Uber is committed to introducing a safer and more affordable transportation service to the world. Uber and its strategic partner, Toyota, have been working together to bring reliable self-driving technology into its network. Uber will be supplying the self-driving system to Toyota Sienna Minivans which will be owned and operated by an agreed upon third party.

Have you imagined taking flying taxis as one leg of your journey to work? Uber is currently working towards offering aerial ridesharing service under Uber Elevate, with plans to launch Uber Air in 2023 in Dallas-Fort Worth and Los Angeles. Different from flight-hailing startup Blackbird which uses private planes, Uber Air uses Electric Vertical Takeoff and Landing (eVTOL) aircrafts to build up a scalable aerial ridesharing network. Passengers can board and alight at one of the Skyports built for takeoffs and landings for the eVTOL aircrafts.

With the realisation of the abovementioned cutting edge innovation, the landscape of transportation today will be facing a drastic change. What we can only imagine or see in the movie, may soon come into real life.

How can I invest in Uber?

We do not offer IPO subscription for US stocks, thus the most direct way for a retail investor to participate is to trade the counter after the IPO starts trading. Investors can place an order on the actual listing day to buy the stock.

For investors who would like to get some exposure to Uber before the actual IPO day, they may do so via investing in companies that have stakes in Uber. Some of the publicly traded companies that owns a sizable share of Uber’s private stock include Softbank (9984.JP) and Alphabet (GOOG.US/GOOGL.US). Softbank (9984.JP) is currently Uber’s largest shareholder. One successful example of such a method of investing was Altaba (AABA.US, previously known as Yahoo), who invested heavily in Alibaba prior to its IPO in 2014. [Source: Uber IPO prospectus]

Given the huge ongoing legal and regulatory challenges, some investors might still be doubtful on Uber’s ability to resolve it. Investors who have a bearish view may invest in Uber’s competitors, Lyft (LYFT.US) – Uber’s main rival in the US which debut its IPO at the end of March 2019. Investors who are pessimistic on the future of ride hailing may look at Medallion Financial Corp (MFIN.US) which offer loan services for taxi medallions in the US. Taxi medallion, also known as a CPNC (Certificate of Public Necessity and Convenience), is a transferable permit in the United States that allows a taxi driver to operate. It used to be one of the best investments in the US, whereby a medallion was worth over a million in 2013 in New York, but it has since deteriorated to around $200k in 2018 since Uber became popular. 3